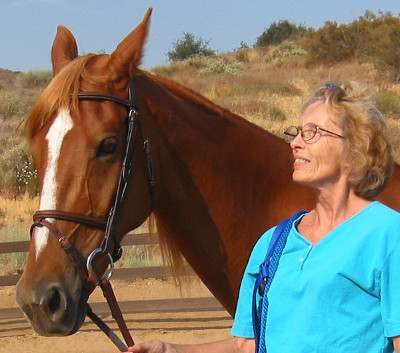 Even when I was a little kid, I wanted to be a cowboy when I grew up. But I lived in suburban New Jersey, so that didn’t happen. Before I settled down to freelance writing and teaching English parttime at local colleges (it paid for my horse habit), I worked at the local five-and-ten, flipped hamburgers for the White Castle, sold Life magazine door to door, worked as a copy editor for a small historical publisher, and for a vanity publisher, and taught horseback riding at summer camp.

My two great loves have always been books and horses. My writing career began with a book. The title was Silver The Wild Horse, except the title was all in capital letters. So was the rest of the book. I was eight—I didn’t know how to work the shift key on the typewriter. I also provided the illustrations, in crayon. When I was twelve, my parents moved. I was ecstatic—our new next-door neighbors had a horse. In exchange for feeding Playboy, I could ride whenever I wanted.

Soon after I graduated from the University of Michigan, I realized that nonfiction was easier to sell, and paid better, than fiction. My first article to see print was about Bachelor, a 16-hand Thoroughbred/Quarter Horse cross, and my first backyard horse. Western Horseman published “Wooing a Shy Bachelor” in 1973. Since then, my nonfiction has appeared in a wide variety of publications including the Boston Globe, the Los Angeles Times, Black Warrior Review, and McSweeney’s. Some of my most widely-read articles appeared in Poets & Writers, where I profiled poet Donald Hall, novelist John Rechy, and novelist and short story writer Octavia Butler, who was the first Black woman to write “literary” science fiction and fantasy and was the recipient of a MacArthur (“Genius”) Award in 1995.

Although I still love literary fiction and occasionally sell short stories to various literary journals, most of my published work has been about horses. In addition to articles in Western Horseman, I wrote for Saddle & Bridle, Horse & Rider, Horse Illustrated, the Pacific Saddlebred Association, the Country Journal, the old Colorado magazine, and several others that have since ceased publication. Now that I and my husband live in Colorado, I currently write a monthly column about horses for the Pueblo Chieftain.