This column originally appeared in the July 1, 2020 issue of “The Pueblo Chieftain” 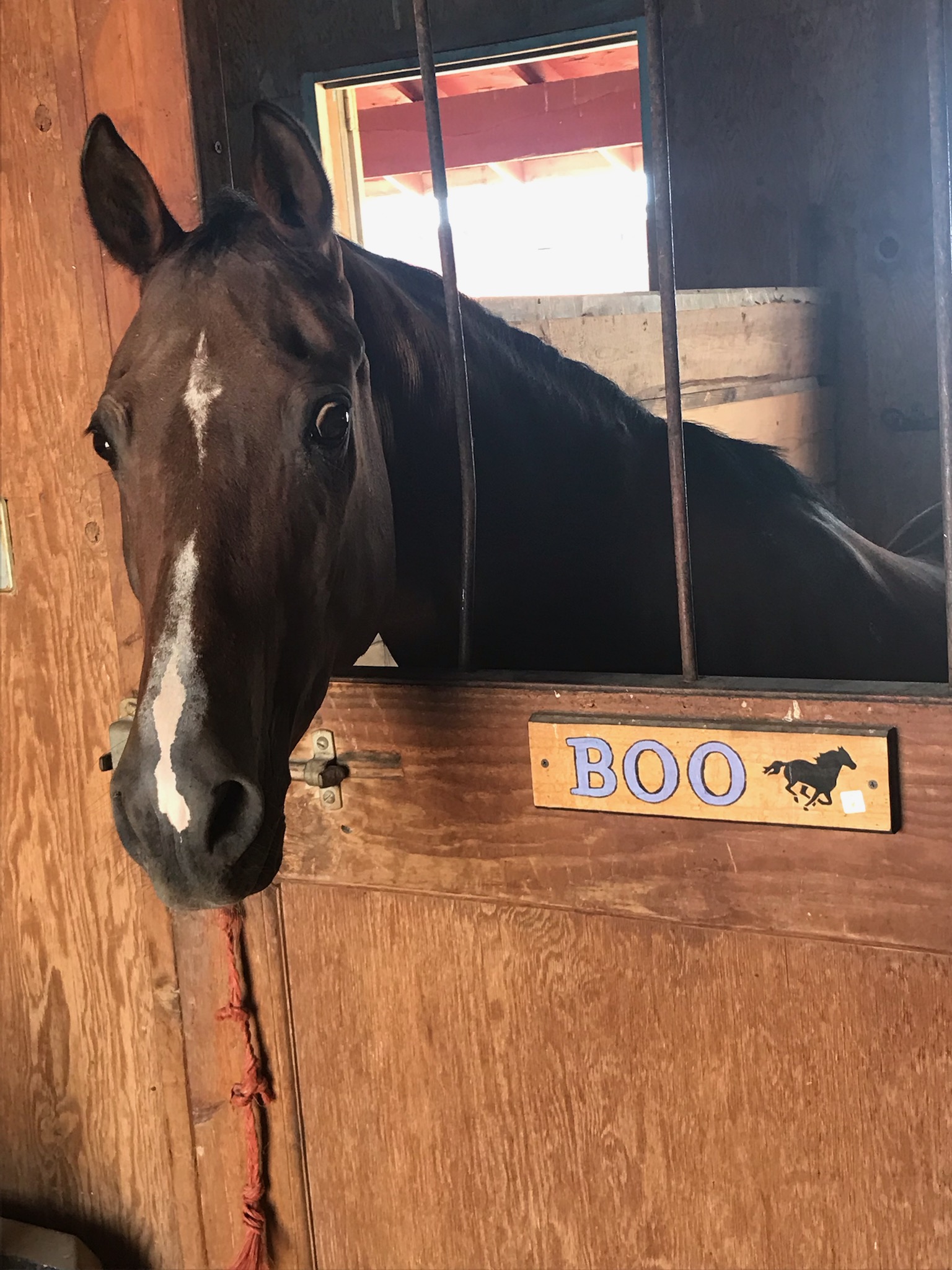 Few things are as frustrating as the horse who doesn’t want to be caught. You walk through the gate, halter and lead rope in your hand. Your horse ignores you. You walk closer. He turns and walks away from you. By the time you catch him, he’s uncooperative and you’re in no mood to tolerate it. What can you do to change his behavior?

Looking at how horses try to communicate with humans is fascinating, since animal behavioralists have only recently begun to evaluate how horses learn. If you’re observant, you can catch your horse trying to tell you all sorts of things. I once owned a Quarter Horse gelding. Before I fed, I’d go up to him to say hello and rub his face. As soon as I looked away, he would turn around, presenting me with his rump. His ears weren’t pinned back (almost always indicates hostility), and he wasn’t cocking a hind leg (can indicate he’s getting ready to kick). Gunsmoke was trying to tell me that in addition to the face rub, he wanted his rump scratched.

Boo, my Morgan mare, did something similar one day. She’s a very fast, methodical eating machine. As soon as there’s hay in her feeder, she’ll stand in the same position until she’s consumed the entire flake down to the last stalk. After that she’ll go for a drink of water. To slow her down, I had just bought her a hay net. In the wild horses graze all day long, a little here, a little there. But domestic hoses, unless they’re pastured, live in small enclosures—a stall, a pipe corral—by themselves, even though there may be other horses nearby. Boo lived by herself, and after she finished breakfast, all she had to look forward to was lunch. A bored, curious horse can get in trouble. Which Boo did, by figuring out how to undo the latch on the pipe corral gate. By the time I went to feed lunch, she had opened the metal trash can next to the chicken coop, head buried in laying mash. I got her back in her corral and chained the gate closed and decided it was time to use my new hay net. The one I had bought had very small mesh, so she could only grab a small mouthful at a time. I put a flake of hay in it and tied it beside her (empty) feeder.

Then I decided to prune some dead branches out of the California pepper trees between the pipe corral and the riding ring. The trees and I were at one end of the corral, Boo and the hay were on the other. She had her rump to me, impatiently trying to yank as much hay as possible out of the net. She nosed it back and forth, but not much hay fell out. Then she grabbed it in her teeth and swung it back and forth. When that didn’t work either, she swung it up and down—so forcefully that she flipped the net and its contents over the fence, completely out of reach.

I watched her pivot and march straight towards me, ears pinned, glaring at me. This was one seriously pissed-off mare telling me—ordering me—to “Do something! Now!” Obediently I moved away from the pepper trees, trotted over to her hay net, and flipped it back over the fence. She dove for the hay. I went back to pruning. With horses, on the ground or in the saddle, most communication isn’t verbal.

Back to the horse who doesn’t want to be caught. Traditional horse-training techniques have depended on the “carrot or the stick” approach for centuries—rewarding good behavior and punishing bad behavior. But one of the modern behaviorists’ most important findings is that horses respond to and learn best from consistently kind treatment, often called “force-free” training. No sticks involved. (To refresh your memory, go back to the video In a Whisper, 2002, and take a close look at how Josh Lyons interacted with his colt.) The underlying principles are always the same: be patient, be consistent, be kind.

If this is a new horse for you, I suggest that you call his previous owner and ask if the horse did the same thing with her. She may or may not tell you. If she does, find out how she tried to fix the problem. Pay close attention, because whatever she did clearly didn’t work. Doing exactly the same thing is going to alienate your horse.

Next, ask yourself why your horse doesn’t want to be caught—and be honest. Does he associate it with something that happens after he’s caught? Such as, are you grooming him too vigorously with a metal curry? Does his saddle fit correctly, or is it pinching him? How about the bridle—is it too tight anywhere? And don’t forget the hardware in his mouth—is the bit the correct size or shape for his mouth? If the horse moves away when you try to mount, he is probably not looking forward to having you on his back. Have you spent the last three or four days going around and around the arena, practicing your sitting trot?

I had to board Boo once while my husband and I packed up the house to move. Her new digs were a pipe corral. She had a neighbor several yards away, a Thoroughbred gelding. They fell in love—or at least she did. When I drove up the next morning to see how she was getting along, she ignored me. She was too busy flirting.

The following day I came prepared—peppermint candies in my pocket. As soon as I saw Boo, who was still ignoring me, I whistled. If you prefer, you can use a voice commend you’ll remember (like “come”). But I like the whistle because it’s unique. Normally people don’t train horses with a whistle. I walked to her corral, whistled again, and held out my hand. She caught a whiff of peppermint and looked at me over her shoulder. As soon as she saw my outstretched hand, she nickered and came to me. When she did, I gave her the mint and rubbed her face. Because I had been paying attention to her behavior, I knew about—and appealed to—her single-minded devotion to food. That’s how easy it is to teach your horse to come when you call him.